"Four Types of Customer Segmentation That Will Elevate Your Business Efficacy"

"How Blockchain Will Shape the Future of Business"

"Four Types of Customer Segmentation That Will Elevate Your Business Efficacy"

"How Blockchain Will Shape the Future of Business"

White Paper: How Developers Tackle Authentication in Their Applications

The University of Bío Bío in Santiago partnered with Nisum Chile to create a curriculum enrichment initiative for its technology track. Along with creating new classes, UBB students participated in an internship program and worked on their graduating thesis at Nisum Chile. This paper will review one of their projects, Kontun, a recommendation framework that helps compare and select single and multi-factor authentication methods.

As technology advances, software applications have progressively become more complex and able to hold larger and larger amounts of data. From initially being used solely for solving mathematical problems, computers are now used in a variety of tasks from creating artificial intelligence to calling a taxi cab. This white paper will cover how developers tackle authentication in their applications from bank transactions to holding sensitive medical data.

When a person tries to access their personal information, such as their social network, email, or bank accounts, it is common to first be required to input two pieces of information: the first would be a string that represents them, such as a username,
an identification number or their email address, and the second is a secret string, known as a password. The process above is known as authentication and it allows the applications to verify that the user trying to access the information is allowed to see it.

However, authentication with a password is not as secure as one would expect. In
the same way that technologies have evolved through time, so have the methods used for illegally accessing other people’s information. There is phishing, where a malicious person applies social engineering to obtain hints of people’s authentication information by speaking with them. Additionally, people often assign easy-to-remember strings such as their own names or their birthdays, making their accounts easier for those with malicious intent to access. Although there are ways to alleviate this, the more restrictions placed on the construction of passwords, the harder it is
for the user. Malicious people take advantage of this and use replay attacks, which automatically input thousands of string combinations until the user’s password is found. The above is even more complicated for Personal Identification Numbers (PIN), a variation of passwords that are used with ATMs and mobile phones. They are usually limited to a small number of digits composed solely of numbers.

There are multiple alternatives to the common username and password authentication methods such as the tokens usually used for performing online bank transactions or user biometrics (face recognition or fingerprints). However, all existing authentication methods are lacking in some aspects, such as some are not user-friendly, others are not adequately secure, and others are too expensive to implement or maintain over time. On the other hand, not all applications need as much security as others, or to be as useable as others; this depends on multiple features such as the information the application will hold (if it is sensitive or not), the users for which it is aimed, and the target context.

Through this white paper, Nisum aims to share knowledge on different authentication methods, especially those that are usually not as widely known by software developers. We will discuss a variety of existing frameworks that help developers perform their comparison and selection of authentication methods for their applications.

Nisum is a global consulting firm that specializes in digital transformation for leading brands. Founded in 2000 with the customer-centric motto “Building Success Together,” they have grown to 3 continents by consistently enabling modernization for Fortune 500 brands. This work has been performed by Nisum Chile SPA, Nisum’s branch in Chile, in collaboration with the University of Bío-Bío.

Some Insight on Authentication Methods

Graphical passwords are a variant of text-based passwords. As the name implies, these passwords are based on the use of images. This authentication method aims to solve some of the text passwords’ weaknesses, namely, the difficulty for users to memorize their passwords, as humans are able to remember images better than alphanumeric characters.

Graphical passwords can be categorized as those based on recognition and those that use the ability to recall. The first, similarly to text passwords, challenges the user to remember a number of images that they selected upon registration. The second asks them to reproduce something that they created during registration, such as
a pattern. Figures 1 and 2 show examples of recognition-based and recall-based graphical passwords, respectively.

For this authentication method, a smart card is used to hold a user’s secret information, which is usually hard for them to remember. Smart cards are similar
to hardware tokens as they are required to be physically carried by the users. This provides stronger security than knowledge-based methods in the sense that a user must be holding the smart card in order to authenticate. One drawback is that, without it, not even the legitimate user can authenticate, forcing them to carry this smart card around. On the other hand, if the smart card is stolen, a thief can impersonate the user and gain access to their information for potentially malicious reasons.

Although there has been vast research on smart cards for remote authentication, they are best used on systems where users need to be physically present, as a reader is needed to interact with the smart card. As such, smart cards are often used for realizing payments.

Through the years, mobile phones have become more and more like portable computers. Most people around the world possess at least one mobile device. Features like mobile-based authentication make the mobile phone an appealing device to use as a hardware token for authenticating users since it does not require them to hold additional tools.

There are multiple ways of using mobile phones as an authentication device. Two of the most common ways are the use of SMS and One Time Password (OTP) software. The first method relies on the mobile phones’ usage of text messages, also known as SMS, to send a code to the users’ phones for them to use to authenticate. The second method uses software installed on smartphones to generate random OTPs over time, in a similar manner as hardware tokens.

Mobile-based authentication is an interesting replacement to traditional software and hardware tokens, but it has its own issues as well. For example, the use of SMS is restricted by service providers and may not be received immediately. Just like any other possession-based method, if the mobile phone is lost or stolen, the user is unable to authenticate through it.

Although they are usually user-friendly, behavioral biometrics have the drawback that they are often easy to replicate. For example, in the case of voice biometrics, a recording of the user’s voice could be used by a third person to authenticate.

Although the knowledge, possession, and inherence factors are well known, there are other factors that have been proposed. One of them is authentication through someone you know. Authentication methods in this factor base themselves on the relations users have with other users: if user A is friends with user B in the case of social networking sites.

For more information on this factor, the following article can be read: Brainard et al. (2006).

Another factor that has been proposed is that of “where you are,” which includes authentication methods based on the users’ geographic location. These methods make use of user-location gathering services, such as GPS, to validate that users are in the correct location for authenticating.

For more information on this factor, the following article can be read: Choi and Zage (2012).

For concrete examples of the different authentication method combinations, reference the following articles:

Helping Developers With Their Decision-Making

Existing frameworks help developers compare and select the best authentication methods for their needs. In this section, the strengths and weaknesses of the most relevant methods will be covered.

The Quest to Replace Passwords: A Framework for Comparative Evaluation of Web Authentication Schemes

This is an evaluation framework that helps analyze authentication methods with regard to their usability, deployability, and security benefits. Multiple attempts have been made to replace text passwords as the de-facto authentication method but none have managed to surpass them, especially in usability.

A Criteria-Based Evaluation Framework for Authentication Schemes in IMS

This is an evaluation framework that aims to analyze authentication methods in IP Multimedia Systems (IMS). In order to accomplish this, three primary criteria are considered: security, user-friendliness, and simplicity. Three secondary criteria are considered as well: awareness, usability, and algorithms. Distinct qualitative and quantitative evaluations such as ISO guidelines and rankings from real users are performed on authentication methods based on these criteria.

Similar to the previous framework, this is only aimed at single-factor authentication methods. Only the framework for performing the evaluations is proposed, but no evaluation is performed.

For more information regarding this framework, the following article can be read: Eliasson et al. (2009) .

Kontun: A Framework for the Recommendation of Authentication Schemes and Methods

Nisum has been working in collaboration with the University of Bío-Bío on the creation of a recommendation framework that helps compare and select authentication methods.

This framework is called Kontun, which means “to enter a foreign property” as this is what authentication aims to prevent. It is in Mapudungun, the language spoken by Chile’s indigenous people.

The Kontun framework considers criteria related to security, usability, and costs. This enables them to recommend the most adequate single-factor and/or multi-factor authentication methods for the requirements given by the client.

Unlike the previous frameworks, the Kontun framework considers multi-factor authentication and gives concrete answers for every software application based on its features.

There are three main steps for the Kontun framework‘s utilization: 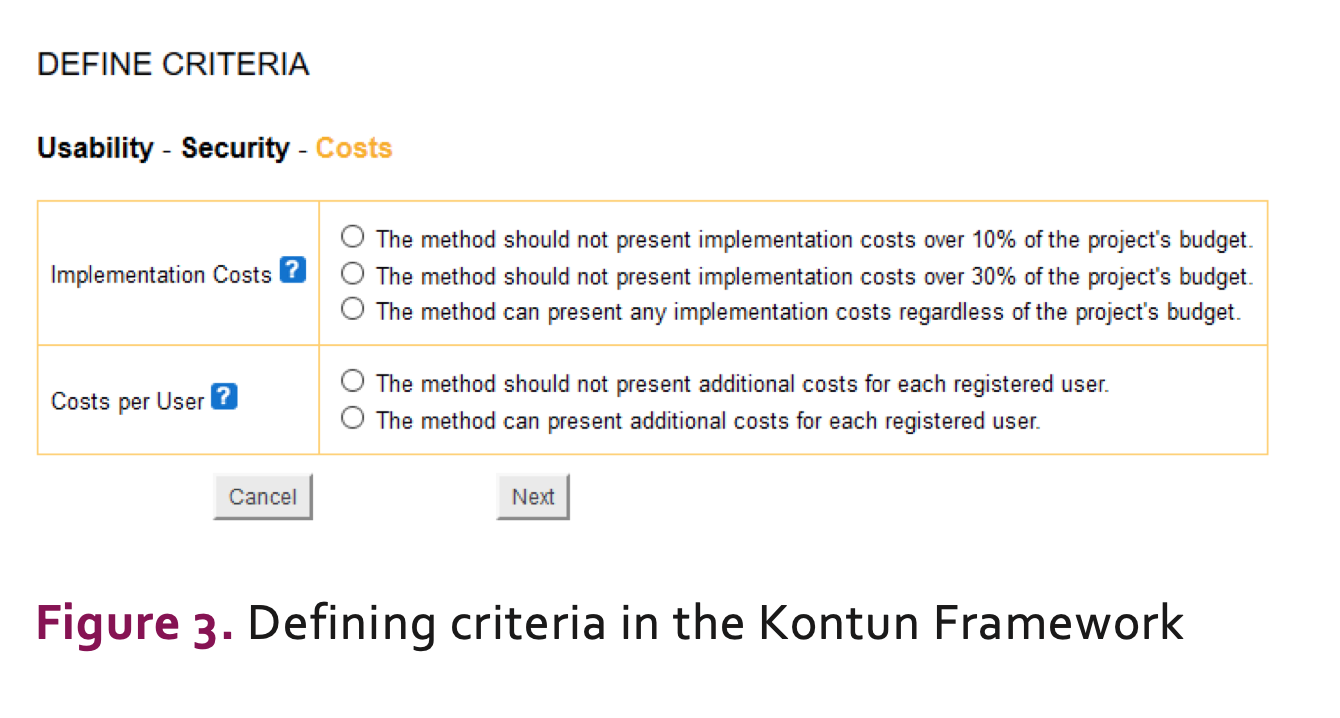 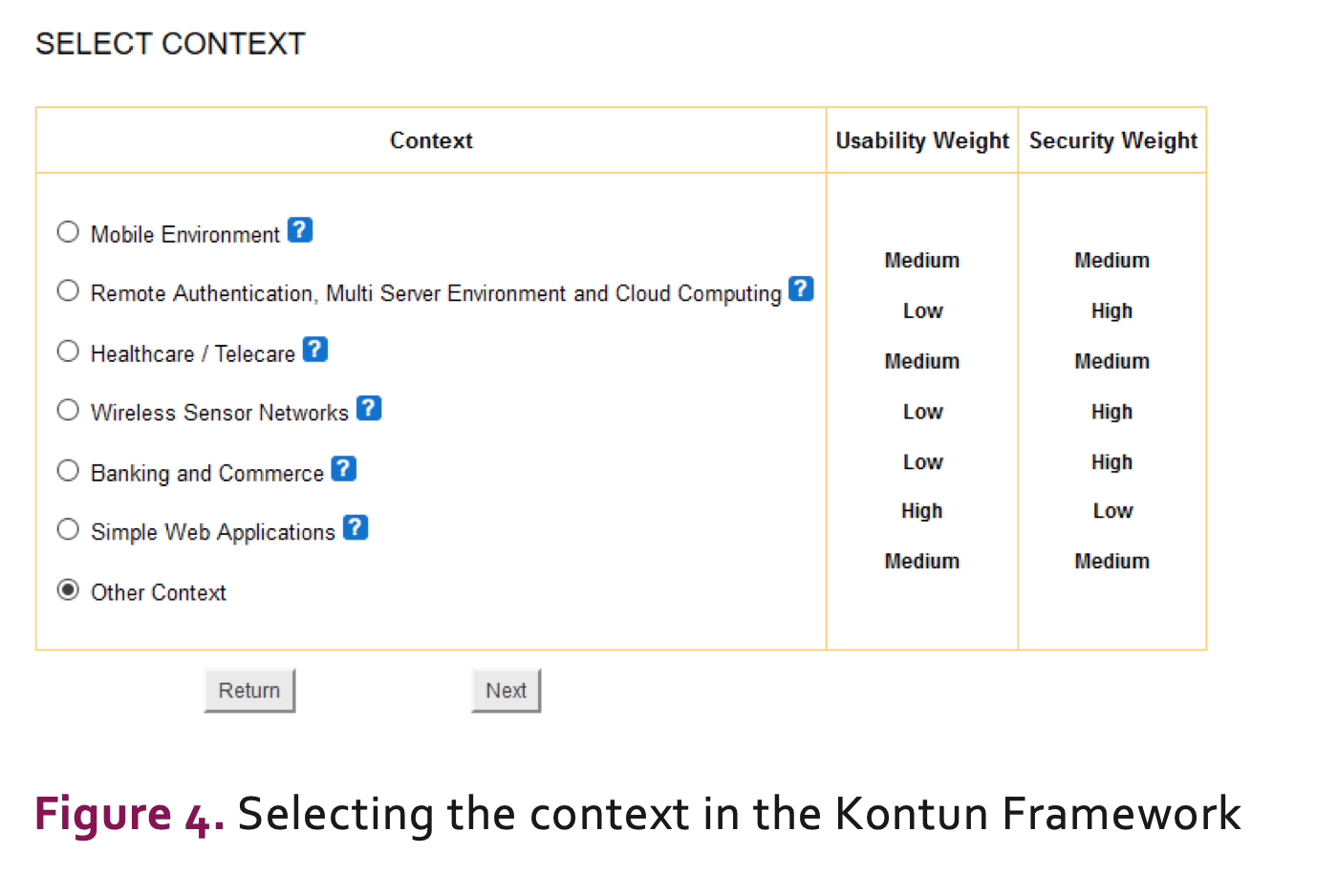 The tool prototype can be obtained from this link: http://colvin.chillan.ubiobio.cl/mcaro/

Comparison of the Different Frameworks

Following is a comparison table to highlight the pros and cons of each of the frameworks just discussed (Table 1 ). 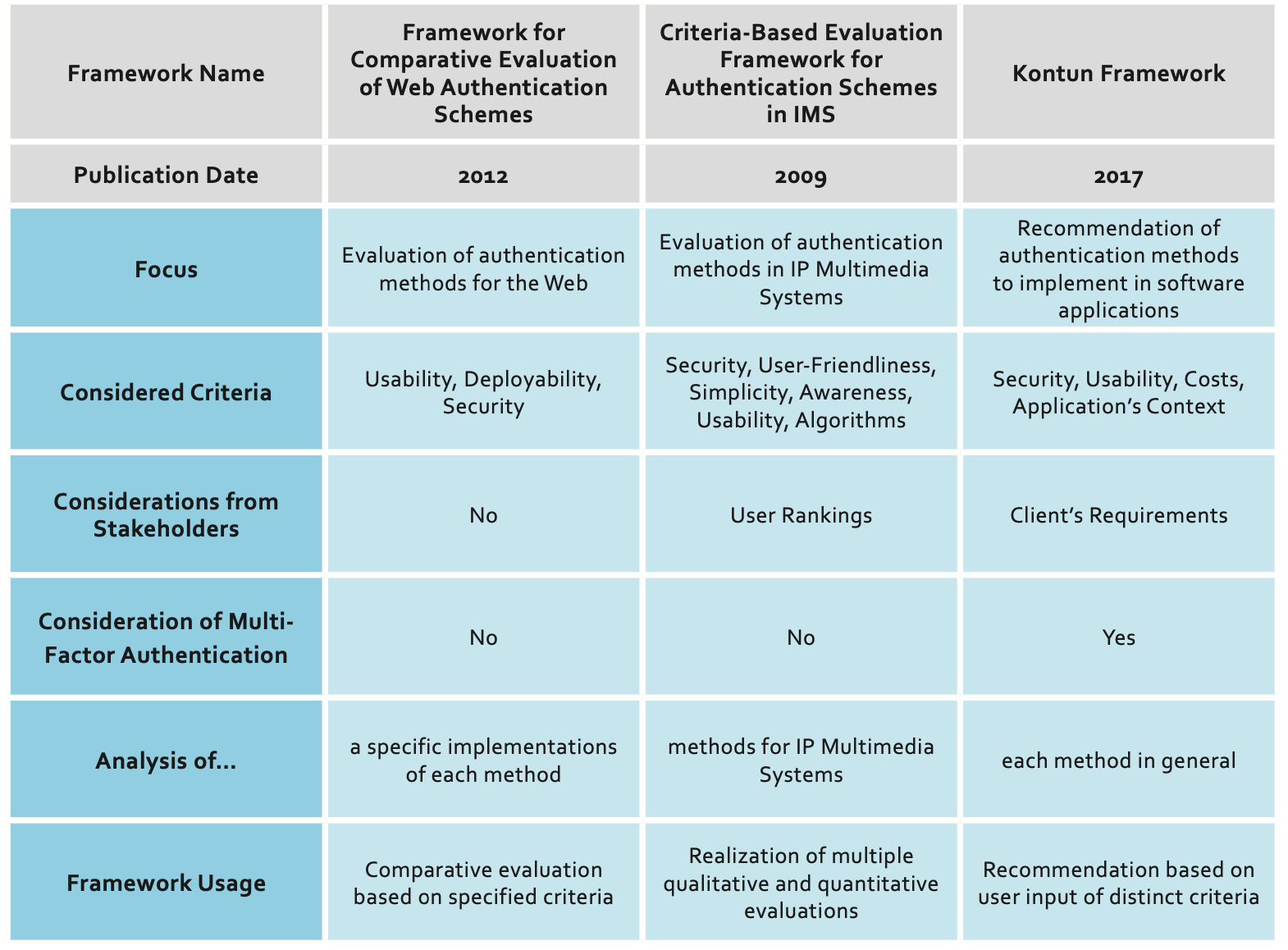 We included brief reviews of the three most well-known, as well as several lesser-known authentication methods. Single- and multi-factor authentications were reviewed as well.

With this white paper, Nisum along with the University of Bío-Bío aims to highlight concerns with authentication. The Kontun framework has been created with the hopes of complementing other frameworks that assist in the comparison and selection of authentication methods.

The following people participated in the creation of the Kontun Framework:

Founded in California in 2000, Nisum is a digital commerce company focused on strategic IT initiatives using integrated solutions that deliver real and measurable growth.

8 Common Project Management Mistakes – and How to Avoid Them: Featuring Nisum Director, Shami Ahuja in CIO.com