Head of Nisum Blockchain Lab Featured in "What Is Hyperledger Besu And What Does It Mean For The Future Of Blockchain?" in BlockTribune

Head of Nisum Blockchain Lab, Sebastian Martinez, explains what Hyperledger Besu is, and why Hyperledger’s first public blockchain strategy is so significant to the constantly evolving blockchain landscape in this article in BlockTribune.

Read the text below or view the full article here. 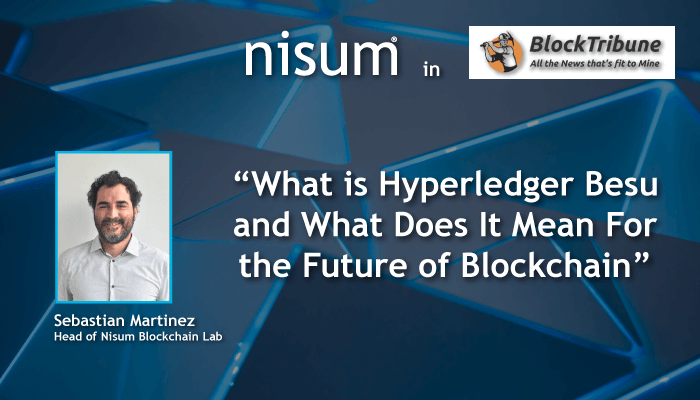 What Is Hyperledger Besu And What Does It Mean For The Future Of Blockchain?

Last year Hyperledger announced its latest blockchain project, Hyperledger Besu. It is a notable event in blockchain’s development for a few reasons, but perhaps most importantly, Besu represents the convergence of the two main blockchain platforms that exist to date; formerly Ethereum Pantheon, Besu is a Java-based Ethereum client and is Hyperledger’s first public blockchain strategy.

As a public ecosystem, Besu represents an extreme departure from Hyperledger’s traditional approach. It is designed with a modular architecture enabling developers to deal with different aspects of a distributed ledger on their own. One of its key features is Consensus Algorithms, which makes it possible to choose between different configurations, for example, IBFT, which improves speed and security by having voters and validators. Networking, storage, and connectivity are similarly flexible so that users can customize the different features of the network as necessary.

Technical aspects and benefits aside, Besu is indicative of a larger trend within the development of blockchain: convergence. The idea of one blockchain for all is impossible, but at the same time, silos don’t make much sense. With Hyperledger and Ethereum working together on technical aspects and connecting more companies through this partnership, a precedent is being set for collaboration across different blockchains.

In practice, right now the most feasible way of scaling interconnectedness among different blockchains is by use of sidechains, which are essentially small blockchains with a high processing capacity that all connect back to the main blockchain. Sidechains allow for more TSP because a different sidechain can maintain unrelated transactions that are executed at the same time. In terms of flexibility, sidechains can work with multiple currencies, which can then be transferred back onto the main blockchain.

Even so, the main networks today, such as Ethereum, must evolve rapidly in order to support an acceptable minimum of transactions.

We are still in the very early days of blockchain and its disruptive potential. Hyperledger Besu is indicative of a growing appetite among enterprises to build both private and public network blockchain use cases for their applications, however, what this will look like in practice, and its implications for the way information is shared in the future, has largely yet to be seen.

However, the entire blockchain ecosystem will benefit from this type of integration. In fact, we can liken the evolution of blockchain to that of the internet. Right now, blockchain is at a similar phase of integration as when servers, protocol improvements, etc. began to interconnect and talk to one another. Today, it’s easy to see just how much that has changed the way information is generated and shared.

Overall, while much remains to be seen, the launch of Besu is a very positive thing for the advancement of blockchain. The interconnectivity that it promotes will eventually lead to, what I believe, will be a sort of “Internet of Blockchains,” dramatically changing the way we handle information today. Certainly, this is a long way off, but Besu is just the first step down the path towards this evolution.

To learn more about Nisum Blockchain Lab or to sign up for a blockchain workshop visit: https://nisum.com/services/blockchain-lab

Sebastian, Nisum’s Blockchain Lab Founder, has been developing technology solutions for over 20 years with companies across Latin America, Europe, and the United States. Leveraging his breadth of experience and insights, Sebastian helped create Nisum's Blockchain Lab, where he researches and builds solutions that bring exceptional value and differentiation for clients.

Nisum CEO in Forbes, "From Omnichannel To Unified Commerce: Why Is It Critical?"

Nisum Blockchain Lab Is among the Top 100 Most Cutting-edge Organizations to Win the 2020 Big Innovation Awards by Business Intelligence Group!