The Head of Nisum Blockchain Lab, Sebastián Martínez, and Nisum Associate, Jessica Iacovelli talk about some commonly held misconceptions about blockchain that are preventing companies from realizing its true potential in AiThority article. Read the full text below or visit the article here. 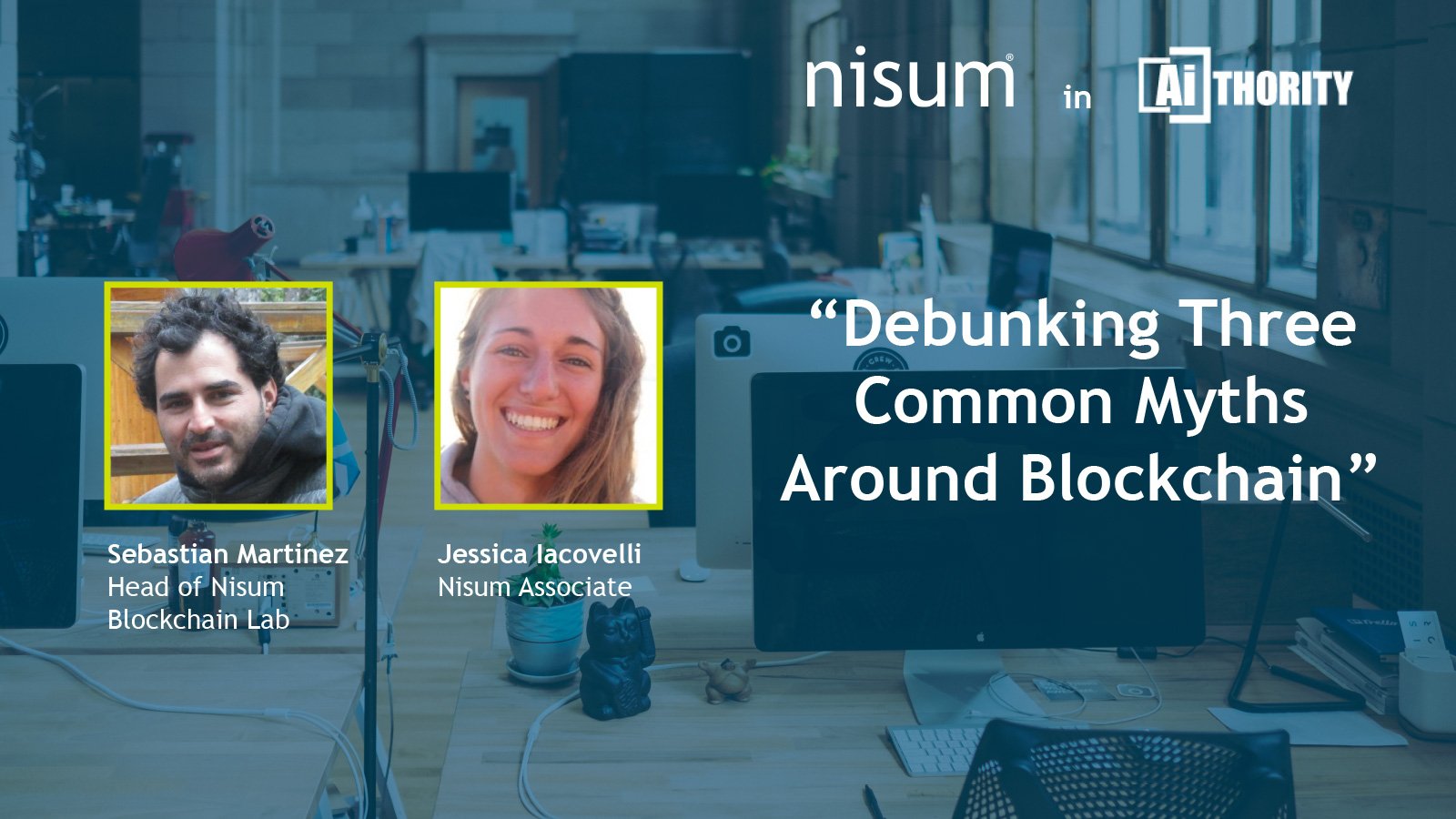 “Blockchain” is arguably the tech buzzword of 2018. With the promise to transform everything from diamonds to pharma, the hype, and speculation on the ways in which this technology will change the ways we live and work have reached a fever pitch. But it’s not just buzz, the investment is there to back it up. In May 2018, VC funding for blockchain had already blown past 2017 totals with $1.3 billion invested. This is just the tip of the iceberg; Gartner predicts that the business value-add of blockchain will surpass $176 billion by 2025, and exceed $3.1 trillion by 2030. In its simplest definition, blockchain is a public, fully transparent, digital ledger that chronologically records transactions made in cryptocurrencies. There is no central authority (e.g. traditional financial institutions) and no single party can change records. And while the Bitcoin craze may have brought blockchain to the forefront of consumer radar, it’s clear that blockchain is the true disruptor and that we have only begun to scratch the surface of its potential.

Right now, blockchain offers a number of business benefits in terms of transparency, security, collaboration, and network availability. Despite these clear benefits, there are some commonly held misconceptions about blockchain that are preventing companies from realizing its true potential.

Myth #1: Blockchain Is Only for Large-Scale Projects

Transparency is one of the most touted benefits of the blockchain and can be applied to any type of system, ranging from large corporations to any database, website, etc. Traditionally, it’s extremely easy for database administrators to modify or alter information. It’s naive not to question that the qualification of a product in a marketplace is true or if the comments are real. Blockchain provides a key value in this aspect independent of the volume or complexity of the data.

Because blockchain is a decentralized system in which several nodes are used, the possibility of information alteration is much lower than with a centralized environment. Of course, this depends on the number of nodes and on the type of transaction validation algorithms, but in general, it’s valid to say that blockchain with a suitable configuration is much more difficult to corrupt than any traditional system. Even for smaller-scale projects, a private blockchain with fewer nodes is harder to break than traditional systems.

The cost of blockchain infrastructure is largely dependent on public vs. private blockchain. Public blockchain means that there is no possibility of restricting access. Here each transaction requires payment, thus eliminating the cost for infrastructure. However, for medium and large-size companies this option could end up being expensive, considering the number of transactions that would occur every day.

Private blockchain requires a company to maintain its own nodes and servers, but eliminates the cost per transaction and allows restricted access. In order to set up a private blockchain about five nodes are needed to preserve security. This would cost around $300 a month to maintain.

For businesses, a private blockchain is a route to take. It gives companies the ability to restrict the view to certain people or companies and it eliminates the cost of paying per transaction.

Myth #3: Blockchain Is Difficult to Implement

Blockchain technology is admittedly not a simple implementation. But nowadays there are several tools, development frameworks, and thousands of applications working to simplify and automate the user experience. While it is true that conceptually the algorithms and cryptography may be complex, this does not mean companies should shy away from implementing the technology. It’s entirely possible to easily work within blockchain without a 100% understanding of the mechanisms below the hood.

Do not let any of these misconceptions prevent your company from exploring the ways in which blockchain technology can drive business value today. While the long-term impact of blockchain is not easy to predict, the technology has already demonstrated its capacity and functionality. As the architecture improves, the impact of the blockchain will only grow.